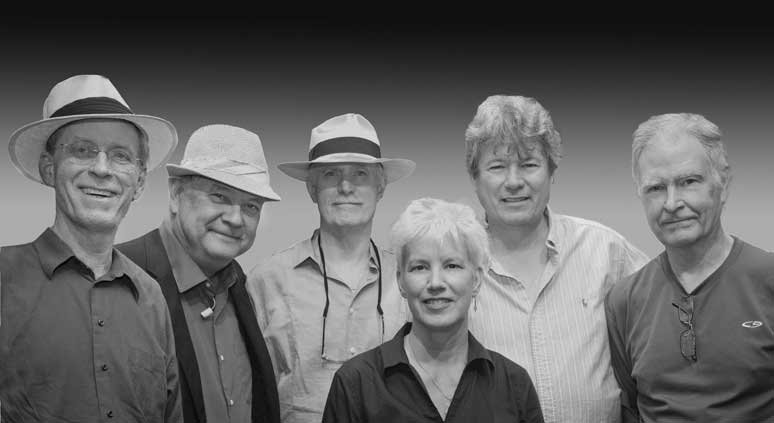 Lee Waterman - Guitarist, Composer, Producer
Lee is originally from New York, where his early interest in music was nurtured by his grandmother, a locally prominent classical pianist. At the age of nine he studied drums and later played in the school band. In his late teens, Lee took up guitar and Latin percussion. For the next several years he studied jazz guitar and music theory with internationally known guitarist and author, Warren Nunes. This strong foundation in the classic jazz styles plus the multicultural influences of percussion studies forged his eclectic compositional style. Among his credits, Lee has led several Bay-Area based combos throughout the last two decades, has performed with sax great John Handy, and opened for many headliners, including Tito Puente and Pancho Sanchez

Tommy Kesecker-Vibraphone and Percussion
Tommy graduated from the San Francisco Conservatory of Music and currently records and tours internationally with world renown group Zakir Hussain and the Rhythm Experience. Other recent projects include "the Different Drums and Percussion Group", which performs for and educates local children. Tommy has appeared at the Monterey Jazz Festival and Russian River Jazz Festival as well as a variety of concert venues throughout the U.S. and beyond.

Bill Lanphier - Electric and Accoustic Bass
First a pianist and then a drummer, Bill Lanphier switched to bass at the age of 19. His playing has been heard on hundreds of international radio and TV commercials. Bill has recorded with the Rippingtons, Richard Carpenter, Harry Chapin, and Stephen Stills. He's performed live with Madonna (the 1985 Virgin Tour and Live Aid), Tom Scott, Kenny G, David Foster, Michael Bolton, the Chicago Symphony Orchestra, Art Garfunkle, Linda Ronstadt, and Rickie Lee Jones. Also a writer and educator, Bill's work has been published in Bass Player, Bass Guitar, Bassics, Bass Musician Magazine.com, World Book Encyclopedia, and Hal Leonard music publications. His playing and compositions are featured on the highly-acclaimed and top-selling instructional video, "The Slap Bass Program."

Bill Belasco - Drums
Bill's energetic and propulsive style is beautifully balanced by his impeccable sense of timing and sound color. After taking up drums at the age of three, He played in various school groups and orchestras, eventually going on the road with The Graduates, a brass rock band that toured throughout the U.S. and Canada. Bill eventually settled in the Bay Area. Over the years, his mastery of samba, bossa nova and baiao rhythms of Brazil, as well as many Afro-Cuban, jazz, and popular idioms, has made him one of the top drummers on the San Francisco music scene. He's performed with such diverse groups as Majestic Swing, The Sharmen Duran Trio, The Dave Miller Trio, the Pickle Family Circus, and the Mike Vax Big Band.

Michaelle Goerlitz - Percussion
Since her arrival in 1980 to San Francisco, Michaelle has been enjoying, absorbing and contributing to the Bay Area's musical richness. She has played, recorded and toured with a variety of artists including Soul Sauce, the Snake Trio, Lichi Fuentes, Rhiannon, Patrick Palomo, John Worley, Jami Sieber, Tammy Hall, Voz do Brasil, Novo Tempo and Bossa 5-0. She was also a founding member of Wild Mango.
The past few years she has also been involved in teaching percussion and drums at such schools as Elmhurst Middle School (Oakland), San Francisco School, San Francisco Friends School and Washington Elementary (Richmond), with children ages 8-14. She draws from her variety of percussive experiences (drumset, congas and other hand drums) to share and have fun with them!